The majority of our walking tours focus on the ghostly legends of historic Savannah.  Our first tour of the evening is our Haunted Savannah Pub Tour, starts at 7:15 pm daily.

The first stop is the Moon River Brewing Company, the oldest brewpub in Savannah (since 1996).  Moon River originally opened in 1821 as the City Hotel and had many famous visitors over the years.  Among the most notable visitors to the old City Hotel were folks that include Winfield Scott, the Marquis de Lafayette, three commodores of the U.S. Navy, and naturalist James Audubon who resided six months in the hotel. There are also other visitors who may choose to sit with you, which may be a soldier or two. That is, Confederate soldiers who never left before Sherman arrived with his Northern soldiers on the March to Sea.   Today, Moon River is considered the most haunted brew pub in Savannah.  Cool Savannah Tours is glad to be among the few tour companies with access to restricted areas of Moon River.

Among the final stops is 17hundred90 Inn and Restaurant located on President Street in haunted Savannah.   The restaurant and Inn are housed in what were originally three separate residences.  The western part of the building was built as a duplex between 1821 and 1823 by Steel White; the smaller eastern section was built by the Powers family in 1888.  The ground level with its slate floor and soft brick walls are thought to date from a previous structure possibly destroyed in the great Savannah fire of 1820.   Original wood shingles are visible in the attic and wooden pegs and wedges holding beams in place can be found throughout the building.

The Inn also has 14 comfortable rooms, each with king or queen sized bed, private bath, a growing collection of antiques and ghosts waiting to tuck you in at night.  The ghost of Anne awaits visitors to the 17Hundred90 Inn.  She is just one of the two famous ghosts which seem to haunt this site.   If you f you’re feeling adventurous stay in Room 204, the room where Anne’s ghost has been seen the most.

Join our Haunted Savannah Pub Tour to learn more about the these and more ghostly legends. 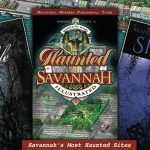